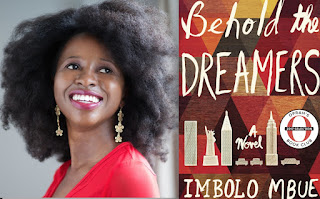 BEHOLD THE DREAMERS is a fairly simple story and one we hear often: migrants making their way to America to establish a better life. Front page news and a common theme in fiction. However, in this novel, the first published by the natural storyteller, Imbolo Mbue, a couple from Cameroon face an added obstacle: the financial crisis and subsequent recession.

He was leaving Cameroon in a month! Leaving to certainly not return after three months. Who traveled to America only to return to a future of nothingness in Cameron after a mere three months? Not young men like him, not people facing a future of poverty and despondency in their own country. No, people like him did not visit America. They got there and stayed there until they could return home as conquerors.

Hard to find jobs when so much of the workforce is out of work and this plot element is front and center. Jende has had the good fortune, through an enterprising cousin, to land a well-paid position as chauffeur for a senior executive at Lehman Brothers. Jende’s determined wife, Neni, is studying to complete an associate's degree in order to progress to schooling as a pharmacist, but takes a summer job as housekeeper for the family. Until the crisis, they are optimistic. Eyes on the American dream.

Nothing in the world of New York movers and shakers is simple, nor is the struggle of the immigrant, and, as expected, their worlds collide in the face of the Wall Street debacle. The divide between rich and poor, white and black, and the core question of what it means to live a good life, is present on every page, but in the hands of this talented writer, never oppressive. We see the truth, we feel the heartbreak and the struggle. It would be easy to presume an ending, but do not: nothing is exactly as it seems.

…I saw this man who used to drive another executive at Lehman Brothers. We used to sit together outside the building sometimes; he was a fresh round man. I saw him downtown. The man looked like he had his last good meal a year ago. He has not been able to find another job. He says too many people want to be chauffeurs now. Even people who used to be police and people with fine college degrees, they want to be chauffeurs. Everyone is losing jobs everywhere and looking for new jobs, anything to pay bills.

The mix of characters is just right. The financier, his social climbing wife and sons. The kindly staff assistant, the caring housekeeper. The Cameroon cousin and the immigration lawyer with tall tales to tell. A church which may or may not provide spiritual solace. All living complex lives suffering from a need for simplicity.

Told more in dialogue than prose, the occasional descriptive passages perfectly render New York at the time [as a migrant from that great city, I can attest to the validity.] You will care deeply about Jende and Nini from page one, you will root for them, and worry about them, and also be shocked by their decisions, which, in truth, make perfect sense and which, in the end, like most good stories, has to do with who we are when far from what feels like home.

Realistic and thoughtful, it’s a novel of cultures clashing and good people stumbling into the ravines of despair and misplaced hopes, and unexpected redemption.

Mbue has just published her second novel, the highly lauded HOW BEAUTIFUL WE WERE, which takes place in Africa and deals with environmental degradation. I will report back.