Europa Press publishes little known [in the US] or out-of-print authors in beautifully designed paperback editions. You’ve likely seen them at the bookstore – hard to miss their striking cover illustrations and hard not to pick one up, thankfully, so you might discover the mighty fiction of a fierce eloquent writer like Elena Ferrante.
“Days of Abandonment” is the best known of her half-dozen novels and the most stunning. In a stream of consciousness style, an abandoned mother of two children narrates the early weeks and months of her self-imposed seclusion and descent into near madness. However she does not dwell in self-pity, oh no; she rages, she disparages men, she seduces an even lonelier neighbor, she rails at her children, she neglects her home and herself so that one fears she might end up the crazy woman upstairs, until she oddly finds her way to equanimity. Brava!
Rarely do you read about grief as charismatically, and honestly, without platitudes or over-simplifications. Here we find wrath, sometimes humor, the evolution of clarity, in a fascinating diatribe with a surprisingly satisfactory conclusion. 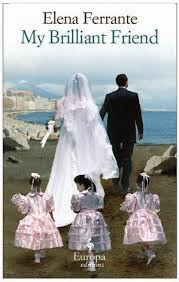 Ferrante might be a poster-child for the adage to write what you know. Her novels take place in Naples and within their pages we can smell the tomatoes, hear the scuffling of shoes below the window, imagine the swill of dirty water tossed from buckets to the sidewalk outside cafes. And, “My Brilliant Friend” captures multiple generations in the midst of cultural change in a city that resists change.
Elena narrates the story of her friend Lila, a unique girl who consistently defies convention even as she ultimately seeks its protection. Elena and Lila grow up in the fifties in the midst of a culture characterized by warring families and traditions. These are the descendants of the Mafia and they wield their power the old-fashioned way, with their fists and with whatever wealth they can take. Persistent class divides rely on power; women, on the other hand, ignorant and largely repressed, are possessions or ornaments. Lila, unusually smart, surly and fearless, is alternately admired and feared by all but Elena, whose intellect propels her to better schools where she might have a chance at a better life. Lila never has that opportunity, despite her superior brainpower. However Elena, as stimulated as she is at school, longs to be more like her beautiful defiant friend, the brilliant friend at the center of everyone’s life. The novel’s ending leaves the reader hanging, because the story continues in the second of the ‘Neapolitan Trilogy’ entitled “The Story of a New Name.” I will read next and report back.


Start with “Days of Abandonment” for a taste of Ferrante’s elegant ferocious fiction.
Posted by Randy Kraft at 4:38 AM No comments: