MUST READING: BETWEEN THE WORLD AND ME 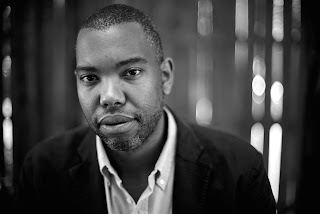 What is there left to say of this extraordinary treatise? 152 pages short, packed to the brim with elegant prose, elegiac rumination, smatterings of racial and political history, and the nearly desperate questions of an intellectual mind trapped in a vulnerable black body. Must reading for every thinking individual, every person of any color who cares about racial disharmony.
The winner this year of the National Book Award, the book takes the form of a letter to Coates’ son, a 15-year old coming to terms with his own susceptibility in light of what seems an escalating epidemic of young black lives destroyed by law enforcement officials. Perhaps no more so than in the past, Coates contends, rather more public by virtue of cell phone video and social media. And, perhaps, by a continued lack of obstacles, allowing in some way, police and like kind to run amok, even in the Obama era, a time that portended racial equanimity.

The book may be seen as a parallel to James Baldwin’s THE FIRE NEXT TIME, also written to a 15-year old [his nephew] although in a more optimistic tone of voice. In the original New York Times review, written by writer/activist Michelle Alexander, Coates was taken to task for his defeatist attitude, even as the book was praised for originality, writing, and brutal honesty. I cannot address this book in the way Alexander can, a person of color and a civil rights lawyer, although I have researched and written about race in my novel COLORS OF THE WHEEL. Still, I agree with this one critique that the book seems unfinished, as if the hypothesis to a scientific exploration was postulated without the ensuing methodology to prove the theory and suggest solutions.

As short as the book is, I had to put it down every so often, the pain of Coates’ reality often too hard to take. Of course, that is exactly what he wants us to feel, to not shy from the discomfort, as he and his ancestors have not been permitted to do, rather feel every punch. And now and then he drifts into more philosophical thoughts, so beautifully articulated, it is worth reading slowly and perhaps more than once.
So you must wake up every morning knowing that no promise is unbreakable, least of all the promise of waking up at all. This is not despair. These are the preferences of the universe itself: verbs over nouns, actions over states, struggle over hope.
I was especially moved by Coates definition of persecution as the control of the body. Not the mind or legal rights or social opportunity, as has been written many times, but the simple dominion over one’s own body. Black beings, particularly young black men and women, can never safely secure their own bodies. From lynching to backseats on the bus to police shootings, wherever they go, they are exposed.
As W. E. B. DuBois said shortly after the Civil War, blacks suffer from “Double-Consciousness” – no matter the achievements, the life path or intent, all people of color are considered first by color, second by all else, and must live up to double standards as well:
One ever feels his two-ness – an American, a Negro; two souls, two thoughts, two unreconciled strivings; two warring ideals in one dark body, whose dogged strength alone keeps it from being torn asunder.
This country was founded on the domination of indigenous people of color and nourished into an economic force by the enslavement of Africans, and has yet, no matter civil rights laws, the election of a brown President nor the continuing elevation of black-Americans into positions of greater authority, to recognize that we are one. What happened to one for all and all for one? Whenever we lessen another life, or allow another life to be decimated, we diminish our own humanity.
As the writer of this fascinating work, Coates has every right, and responsibility, as journalist and parent, and citizen, to remind us we have a long way to go, and to do so in such brilliant writing is a gift.
Read it. Tell your friends to read it. Tell your college-age kids to read it. Talk about it. That alone is not going to create change, but it is a good start.
The birth of a better world is not ultimately up to you, although I know, each day, there are grown men and women who tell you otherwise. The world needs saving precisely because of the actions of these same men and women. I am not a cynic. I love you, and I love the world, and I love it more with every  new inch I discover. But you are a black boy; you must be responsible for your body in a way that other boys cannot know. Indeed, you must be responsible for the worst actions of other black bodies, which, somehow, will always be assigned to you. And you must be responsible for the bodies of the powerful – the policeman who cracks you with a nightstick will quickly find his excuse in your furtive movements. And this is not reducible to just you – the women around you must be responsible for their bodies in a way that you will never know. You have to make your peace with the chaos, but you cannot lie. You cannot forget how much they took from us and how they transfigured our very bodies into sugar, tobacco, cotton and gold.


Ta-Nehisi Coates BETWEEN THIS WORLD AND ME
Posted by Randy Kraft at 8:39 AM No comments: