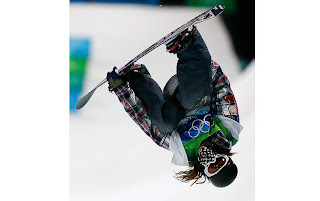 Watching extraordinary young people on snowboards, gliding high up into the air and twisting their bodies in mind-bending spectacular poses before they land. Sometimes they seem to float, defying gravity. A friend suggests that have different DNA than mere mortals; perhaps this is so. They are more than magicians, their exuberance lights their path.

Watching them lights up my world as well. I exalt in their prowess.

Earlier this evening, I listened to one of my all time favorite writers, TC Boyle, tell Tavis Smiley that he was blessed by no one ever saying no to him. You see, he said, my mother loved me, and she never said no – I wore what I wanted, I did what I wanted. Tavis connected the dots: that uninhibited ability to decide for himself, the freedom to create his own persona, to pursue his own path, had resulted in an often outrageous creative streak, and a willingness, rather a perpetual intent, to write whatever he wanted, however he wanted. Taking risks that satisfied his unwillingness to say no to himself. He answers only to himself and bestows upon himself his own rewards.

For those of us who have an inner voice that more often says no, this is a mantra of sorts.

I have a good friend in CT who cries whenever anyone wins an award – gold medals, Oscars, anything where there is a personal best. She cries because deep down she feels denied the option to take risks and answer only to herself. Her personal path was censored, as so many are, especially those of us of the boomer generation. The battle for most of us is not to challenge our personal best but to do the best we can with what we’ve got.

I often share her tears. I envy those unencumbered by that inhibiting inner voice.

So it comes back to risk. Risk, more often defined as what we have to lose, rather than what we have to gain. The older I get the more willing I am to take the risk, to reach out for not so much a personal best, not in the sense of the champion, but to move beyond the limitations imposed, integrated, deeply ingrained over the years, and thus self-imposed in the end. To break out, be a little bit outrageous [that’s about all I can muster] and not be afraid to fall. So much more to gain than to lose.

They say that one doesn't get older, one gets more so, but this does not have to be so. Colette said we are never too old to become the person we want to be. Although, there is something to be said for aging gracefully.

The Olympics is much more than a bi-annual sporting event. It is a bi-annual challenge to reset our own barre. That incredible spirit of youth that defies risk, that laughs in the face of risk and says ‘come and get me.’ Wow. I am in awe of them, and grateful for the reminder that we only live once. Really, what is there to lose? Always more to gain.
Posted by Randy Kraft at 8:34 PM No comments:

In Praise of the Music 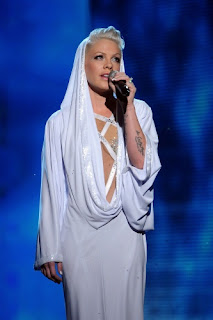 OMG. The Grammy's. A 3-hour mind blowing concert. Some of the most remarkable talent, big productions [occasionally over the top, of course] the style, the outrageous, the sheer joy of the jubilance of young musicians and the pleasure of the rock. I am transported back to my youth, bouncing around the house to the music, watching every move Beyonce makes, and that wild Lady Gaga, with dear Sir Elton by her side, what a trip. Honestly, I felt like a teenager again. Wild and unencumbered. And reminded once more the power of music, whatever your taste, and even at this exalted age, I just love that rock and roll. All versions of it. I was enthralled with it. And I carried the jubilance with me into a night of sweet dreams and to another day of a slightly quicker step and that sense of possibilities that only the music divines. Wow. Pay attention Oscars and other award shows - it's about the magic, the entertainment. Awards, not so much. Simply the conduit, the conveyer of the art. I continue to be astonished by the sheer imagination of this generation, beyond even what I felt that joyful day in the early sixties when I discovered those boys from Liverpool. In this crazy world of manic politics, angry terrorists, homelessness and loneliness, it is only the music that brings us back to a Nirvana that comes in three minute takes that last all day, and night. I feel it still. Especially this year, the year of the women with incredible pipes and gorgeous bods. Gaga is indeed gaga, with the talent to match, the extraordinary Pink, the stunningly beautiful Beyonce, and the wonderful Fergie and Black Eyed Peas, the amazing friends of Michael Jackson, Carrie Underwood of special note, dear Dave Matthews... and all the rest. You made my day, and then some. And to itunes, my new friend, thank you for the instantaneous gratification.

It's a wonderful world as long as there is the music. Makes everything else possible.
Posted by Randy Kraft at 8:06 PM No comments: