Of Switzerland and Sebald

My friend, who lived in Switzerland for a year when she was a girl, says everything about the country is neutral. She meant that in the most positive way. She has a point. To my mind, not neutral like a boring beige wall, more like a pearly white semi-gloss that sets off other colors to their best, in this case reflecting the bright palette of green hills and blue skies, overflowing window boxes and the reflection of tall leafy trees in sparkling-clean rivers and lakes. A tranquil backdrop that helps keep chaos at bay.
I recently returned from a holiday in Switzerland, so I took with me a novel I have been meaning to read forever, which takes place mostly in the region – Austria, Germany and Switzerland. However, this is not a novel of neutrality. Rather fiction evoking the extremes of displacement – the distance from homeland and family and from one’s own identity that so many people of western Europe experienced during WWII.

THE EMIGRANTS, by W. G. Sebald, published in 1992, is considered a modern classic, and now I know why. Four long narratives, as if intersecting memoirs, reveal the lives of four Germans in exile – a painter, a doctor, a teacher, and one eccentric uncle. The narrator follows their paths to migration and exile from mainland Europe to England, Greece, Israel and New York City. These are the lost souls post-Holocaust, whose lives were forever altered and who, as emigrants, never quite settle comfortably. A little like Dickens’ Marley doomed to eternity in chains. Through their stories, we encounter a whole host of other characters who either facilitate their displacement or serve as an anchor to help them feel more secure, although they never are.


A lesson on the permanent state of transition experienced by immigrants of all types, both emotional and physical, the emotional-psychological being the more devastating.
The novel is not as somber as it seems, although certainly a melancholy river runs like those emanating from the Alps down hillsides to the many charming cities of Switzerland.  Wherever I was, snow covered mountains were present, in the distance, looming over the encroaching colors of autumn. This country is truly postcard perfect, but, as Sebald reminds us, not for those who have been forced to leave their homes and their people.
“I gradually understood that, beyond a certain point, pain blots out the one thing that is essential to its being experienced – consciousness – and so perhaps extinguishes itself; we know very little about this. What is certain, though, is that mental suffering is effectively without end.”
The neutrality I found most conspicuous in Switzerland was the equanimity. In restaurants, people converse as quietly and amiably as if extras in a film. On trains or riverside benches, people read [real books] or gaze out at the endless views. One young man looked up at me with a smile as I passed, as if he’d just read an especially pleasing passage. Trams and trains and buses are clean and run on time – right on time - when the minute hand hits the mark on the clock, off they go! Because bikes and mass transit are preferred forms of transport, and most of the Allstadts, the old cities, have been pedestrianized, I never once heard a car honk. Not in ten days of travel. Even on highways, traffic seems to move.
The general tranquility reminded me of Laos, a very quiet country, although Switzerland never felt repressed, rather regulated. It’s all about expectations here. In Laos, or Japan, for example, a crime against another person is a crime against society, thus a source of shame. Here, people are simply expected to behave. It’s not a matter of state, rather a matter of decency. In return, and in return for high taxes and a high cost of living, [this is the most expensive country in Europe] people earn a decent wage, their health care is high quality and reasonably priced, and everything, I mean everything, works as it is supposed to work. The Swiss reputation for precision is well deserved.
Sunday is a quiet day. Most shops and restaurants, and many museums, are closed; only the most important tourist sights are open. Families go to church in the morning and in the afternoon they stroll. Late in the day, cafes and bars re-open for afternoon tea or evening beer. I visited good friends who live in a charming old-world city near the Austrian border, who tell me they were advised that Saturday would be the day to shake out carpets, as if the aggressive motion, and the dust motes, might disturb a Sunday.
I also noticed that doors are rarely open, never beckoning, as if whatever is within is meant to be discovered. Only the offen [open] sign invites entry. As in other European countries, metal blinds are mounted to the exterior of windows, sensible and attractive, and when closed keep out the cold, the heat of the sun or the light, and, on the interior, provide an unobstructed view. And everywhere, the marker of modernity: construction trucks and workers rebuild roads, restore old buildings or build new. The contrast between old and new architecture is a feast for the eye, if you enjoy that contrast, as I do. 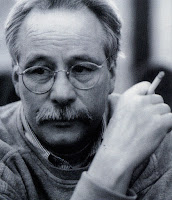 Which brings me back to Sebald who writes of the infrastructure of the mind in constant need of repair. All four stories depend on an understanding of the atrocities of the past, but without description. Absolutely nothing heavy handed, and in that subtlety a more powerful expression of the horror of the European mid-century. No feigned solutions or explanations, no platitudes.
Near the end of the novel, the narrator visits a cemetery, each gravestone a story. Who will remember those displaced, he seems to ask. Over time, who will have known them or known the profound experience of exile?
One of the characters copied out passages from writers of the period who suffered deep depression. “Paul copied out hundreds of pages, mostly in Gabelsberg shorthand because otherwise he would not have been able to write fast enough, and time and again, one comes across stories of suicide. It seemed to me, said Mme. Landau, handing me the black oilcloth books, as if Paul had been gathering evidence, the mounting weight of which, as his investigations proceeded, finally convinced him that he belonged to the exiles…”
If you enjoy a civilized society set in the most magical and pristine environs, and of course, fine art, lovely shops, good beer and wine, cheese and chocolate, Switzerland is a great place to visit. And, if you enjoy a stunningly simple piece of fiction that reminds you how tethered we are to one another, if only we show each other compassion, read Sebald.

Posted by Randy Kraft at 2:37 PM No comments: