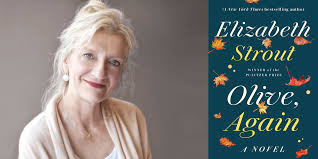 Since Elizabeth Strout burst on the literary scene in 1998 with the novel “Amy and Isabelle” she has been revealing less than attractive truths about small town America in extremely attractive prose. Her fictional town of Crosby, where much of her fiction has been set, is a microcosm of the American culture – neighbors whose personal narratives are unfathomable and often astray while their motives can be mysterious despite ostensibly simple in design. In this place we find marriages without passion, angry spouses, false friends, repressed children, misogyny and harassment… And all, once again, under the watchful eye of the irrepressible incorrigible, often intolerable, but nonetheless captivating, Olive Kittredge, the heroine of the eponymous novel that won Strout the Pulitzer Prize. She’s back in the aptly named, “Olive, Again.”
I confess, when I began reading this book, I wondered, briefly, why the author, and reader, should go back to Olive, to her often warped perception and harsh rules, or why I wanted to return to that town, and those small town people, but, in a matter of pages, it is clear: the cast of characters is not only a fascination, and the prose exquisitely crafted, but we need to go back there to be reminded of all that ails us and what might redeem us.
In the end, to forgive Olive, to understand her and sympathize with her, is what we all need to do for each other.
Olive’s second husband says it best: He understood that he was a seventy-four-year-old man who looks back at life and marvels that it unfolded as it did, who feels unbearable regrets for all the mistakes made. And then he thought: How does one live an honest life?
Strout says she took six years to write that first novel, but clearly those characters remained in her heart and on her mind. [And watch for a timely reappearance.] Who knows how many stories of the fictional town residents she has logged over time to resurface at just the right moment in just the right book, most taking place in that same place.
Here, a decade after her first appearance, Olive woos us again with her determination to understand herself, as well as her friends and neighbors and, again, with her surprising compassion for those least understood, those least seen, as if she has a filter through which she observes those who need the most and miss what’s right in front of her eyes that matters more. And, we are right there with her as she grapples with age.
It was almost panic that she felt. “Damn man” she said, and she meant the doctor, who was still young and had no idea – he had no idea – what it was like to be old and alone. But other days she felt okay. Not wonderful. But she could drive and get her groceries and she visited her friend Edith at that awful old folks’ home she lived in called Maple Tree Apartments. Then when she came home she was glad to be there, although she could not shake the feeling that it was Jack’s house. She sat in Jack’s chair these days so that she wouldn’t have to look at it gapingly empty. And sometimes as she sat there a deep sadness trembled through her…
Olive is as real as it gets. The new novel lives up to its origin story and, as award-winning writer Pico Iyer said recently, Strout may be the most important fiction voice today. In their deceptively simple way, she and Olive speak for us all. As Olive would say, What a thing!