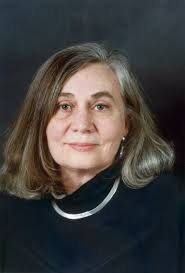 Published last fall, LILA garnered high praise and major award nominations. The writing is lush, characters fascinating, themes universal, and despite being the third in the “Gilead” trilogy, featuring the same people and place, wholly original and heart-wrenching.
The trio of novels, which includes GILEAD and HOME, focus on minister John Ames and his relationship with the much younger Lila, who comes into his life forty years after the death in childbirth of his wife and child.
Writer Robinson is a devout Christian and her intimacy with biblical stories infuses all three novels, although never with a heavy hand. Quite the contrary. Reverend Ames persistently ponders with innocence bordering on naiveté the essence of human nature.
Even scenes we’ve read before seem new through different eyes. Ames told his story first in GILEAD, but the subsequent novels are told in a tight third person, so we experience everything now through Lila's eyes, and heart, and it is her autobiography of abandonment, deprivation and dislocation which are the cornerstone of the story, revealed in exquisite detail, and beginning at the beginning when she is stolen away by a migrant worker from other migrants, as if merely a piece of bread.
The old woman held her standing in a white basin on the floor by the stove, and Doll washed her down with a rag and a bit of soap, scrubbing a little where the cats had scratched her, and on the chigger bites and mosquito bites where she had scratched herself, and where there were slivers in her knees, and where she had a habit of biting her hand. The water in the basin got so dirty that they threw it out the door and started over. Her whole body shivered with the cold and the sting. “Nits,” the old woman said. “We got to cut her hair.” She fetched a razor and began shearing off the tangles as close to the child’s scalp as she dared—“I got a blade here. She better hold still.” Then they soaped and scrubbed her head, and water and suds ran into her eyes, and she struggled and yelled with all the strength she had and told them both they could rot in hell.
Lila reveals her evolution from waif to wife and mother, but this is not really a tale of redemption. Lila is a lost soul and she knows she will always be. She even tries to wash away the waters of her late life baptism, believes she is not deserving.
Among the many themes and images, hunger predominates, and food plays a major role. Food as the embodiment of faith as well as sustenance. Flowers too, as Lila discovers a passion for gardening. Every page is rich with imagery and every scene unravels as much as evolves.


I look forward to whatever Robinson produces next. Her first and only other novel, HOUSEKEEPING, won the 1980 National Book Award, and should be a book group favorite, so if you haven’t encountered that lovely tale yet, start there, but do not miss the GILEAD trilogy. Or, just read LILA, which stands alone.
Available in hardcover and e-book, but should arrive in paperback for fall reading.
Posted by Randy Kraft at 5:42 PM No comments: