Hamnet: To Be Read - Not To Be Missed

Maggie O'Farrell, an accomplished and wonderful writer, steps into a new league with this wholly original readable stunning work of fiction. Can you tell I think it's divine?

The tragic but surprisingly heartwarming tale recounts the largely imagined early life of Shakespeare, his enigmatic wife, Agnes, also known as Anne, and the death of their eleven year-old son, Hamnet. The inspiration for what many consider the bard’s greatest play, Hamlet, written four years after the boy’s death. And what a character the young Hamnet is: as ephemeral and existential as his namesake.

Hamnet’s mind, however, is in another place. For a long time, he could hear his mother and his sisters, his aunt and his grandmother. He was aware of them, around him, giving him medicines, speaking to him, touching his skin. Now, though, they have receded. He is elsewhere, in a landscape he doesn’t recognize. It is its cool here, and quiet. He is alone. Snow is falling, softly irrevocably, on and on. It piles up on the ground around him, covering paths and steps and rocks; it weighs down the branches of trees, it transforms everything into whiteness, blankness, stasis. The silence, the cool, the altered silver light of it is something more than soothing to him.

So little is known about Shakespeare’s early life so O’Farrell has woven what is known with what she has exquisitely invented. Once again, in this fiction, the telling is what matters most: mesmerizing prose, nearly Elizabethan poetry, but not, and not couplets, with stunning detail, for the landscape, the scope, and, at the heart of this tale, the grief of losing a child.

So she cannot bear their gaze, cannot meet their eyes. She doesn’t want their sympathy and their prayers and their murmured words. She hates the way people part to let them past and then, behind them, regroup, erasing their passage, as if it were nothing, as if it never were. She wishes to scratch the ground, perhaps with a hoe, to score the streets behind her, so that there will forever be a mark, for it always to be known that this way Hamlet came. He was here.

The story is as much about Agnes, a shaman, loving wife and mother, as it is about William. We meet their families. We inhabit the village life of late 16th century into the 17th, on to Stratford and London. You will see and hear and scent these worlds and feel nearly every heartbeat of every one of the many compelling characters. 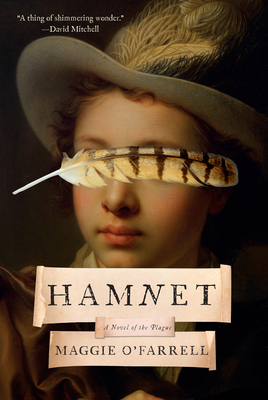 Captivating from page one to the last powerful scenes in London at the playhouse where Shakespeare made his mark.

The crowd around her, she cannot help but notice, is entirely still. No one speaks. No one moves. Everyone is entirely focused on these actors and what they are saying. Gone is the jostling, whimpering, brawling, pie-chewing mass and in its place a silent, awed congregation. It is as if a magician or sorcerer has waved his staff over the place and turned them all to stone.

My call for the Booker prize. A phenomenally elegant work of fiction. Happy reading.

Posted by Randy Kraft at 8:52 AM No comments: