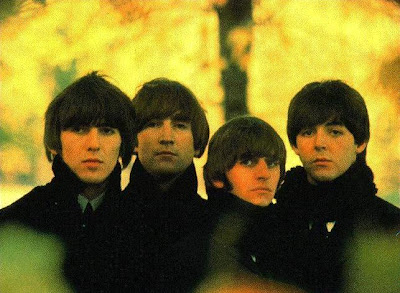 In the car today, running errands, [my least favorite pastime] the radio plays the Beatles. A 50th anniversary retrospective. I remember their arrival to the US. I ditched school to wait all day at Forest Hills Stadium to buy tickets for their concert, ended up sitting nearly in the last row, but just below a speaker, which saved the music from the screaming crowd.

I was hooked from the first. A Paul girl, as Anna Quinlan would say, although later I became a John girl. A sure sign of personal evolution I thought at the time, and about the same time that I began to more fully appreciate the Rolling Stones.

Twice I linger in the car to listen. One cannot walk away from Blackbird, or even from the strange and wonderful Rocky Raccoon. Errands can wait.

I remember well that we were all captured at first by their kinetic energy, their adorable looks, those pin-ties and black suits, the shaggy hair, but it was the music that kept us to the end. My mother asked me what I saw in those skinny boys from Britain, but she got it, she had an ear for melody. I heard her humming their tunes now and then while cooking.

My mother and I traveled to Europe the summer I was sixteen - a dream for  her that my father was determined to fulfill before she died. London was the first stop. I tracked down the Beatles tailor, whom I had read about somewhere, and had a lovely chat with the son. I felt closer to them forever after, although their music was everywhere, for all of us. 1964. The little girl from the Bronx and her immigrant mother traveling on the iconic $5 a day journey, Beatles music the soundtrack.

So it should be no wonder that every time I hear them, the nostalgia is overwhelming. But today it is more than that. It is the music, simply the music. We forget sometimes how damn good it was. The poignant melodies and eccentric lyrics. The string orchestra in the background that their producer introduced to rock music. The simple starts, the movement to crescendo, the mesmerizing choruses. Unforgettable. Touching, still. Makes me want to cry, and makes me smile. As few can do.

On arrival home, I sit in the garage a few moments, close my eyes, and sing along to Eleanor Rigby. Still wow.

I will dig out all the albums today and listen, one by one, and feel my heart swell with the memory and the joy of that sound. A perfect Sunday afternoon [now that chores are done.]