A HORSE WALKS INTO A BAR
by David Grossman 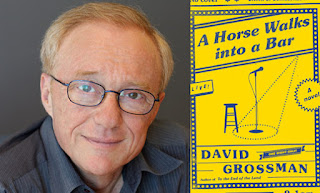 Don't be put off by the title! This remarkable novel sat on my pile for nearly a year, even though I am a great fan of the prolific, award-winning Israeli writer, David Grossman, only because the title did not appeal. And the story line - one night’s stand-up performance, seemed off-putting. Talk about judging a book by its cover, and, as is usually the case, a huge mistake.

The star of the novel, a comedian well passed his prime, has set out on this night to try to make things right for himself. Trapped in a memory that has haunted him and which, even at this late stage of life, seems unresolvable. Perhaps unforgivable.

He has arranged a performance in a club in an outpost in Israel, the finale for a diminished career, and he has enlisted the support of a childhood friend, now a revered, recently retired, District Court Judge, whom he asks to come to this performance to serve as witness. But to what? And the judge himself, mourning his wife, has come to question his own existence in the larger world.

I knew all this time that he wouldn’t let me get out of here easily. That the whole business, the invitation and the ridiculous request, was a trap, his private revenge, a trap I walked into like an idiot.

David Grossman knows how to weave a compelling story. What you might call a tour-de-force in less than two hundred pages. If you haven’t yet read “To the End of the Land,” start there. A masterpiece, featuring one of the most poignant heroines in modern fiction. However, the two novels are so completely different in style and content, you would never suspect they were written by the same author.

HORSE…  reveals a difficult, deeply bonded, and also dysfunctional relationship with the comic’s parents, a relationship that is tested one week at a summer military youth camp. This is the place where the comic and the judge once crossed paths and where tragedy struck – the defining moment of the comic’s life and, surprisingly, in a far different way, also for the judge.

In addition to the judge In the audience the night of the standup, there are the usual hecklers who demand humor not pathos, members of the crowd encouraging the comic to examine the lifelong reverberation of that summer, and a few who seem to have an interest in the comic’s personal reparation.

Here’s the thing: within the despair and anger, the horrors of a moment that forever alters a life, there is incredible humor. Laugh out loud humor. In a lengthy monologue [honestly, how does this literary novelist master comic timing so well?] peppered with flashback and psychological and emotional contemplation, within the humor and strain, the questioning of an entire existence, the judge comes to realize he is there for a larger purpose, and the audience is treated to an extraordinary all-nighter in comedy theater, until, in truth, the last man is standing.
Posted by Randy Kraft at 1:04 PM No comments: