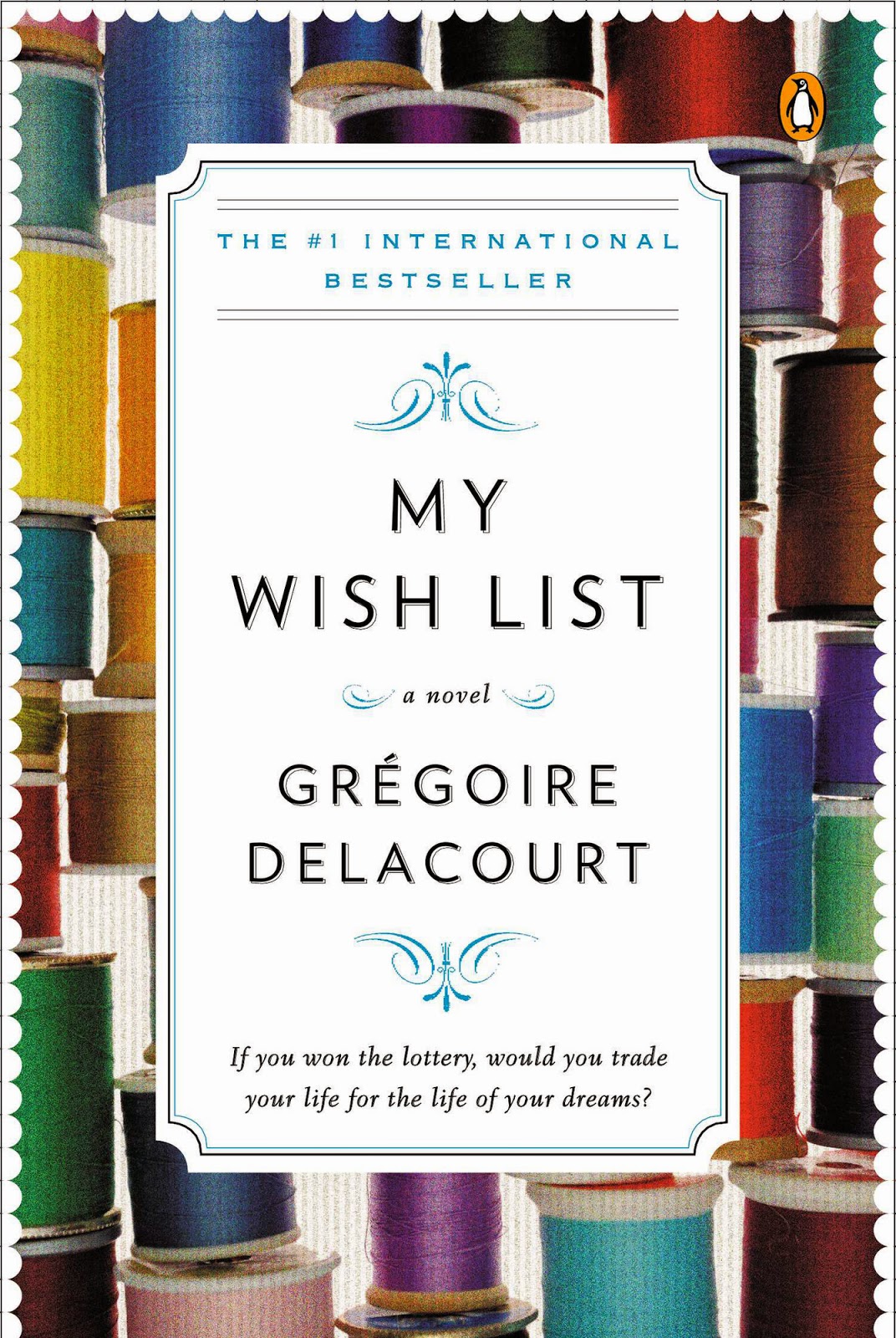 The great pleasure of a local bookstore is the hidden treasure that an enthusiastic bookseller presses into your hand. This particular book, "My Wish List" is on bestseller lists in Europe, however I might not have found it elsewhere and I promise you, this is a true gem.

A slim novella with unpretentious prose and powerful subtext, the stream of consciousness narrator, one Jocelyne, married to a man named Jocelyn, lives in a small town in France where she owns a sewing shop and blogs about cloth and textures and threads. "TenGoldFingers" [perhaps a nod to Midas] has growing list of devoted followers who evolve into Jo's cheering squad and support network, and one might say the true fabric of her life.

Harboring the sadness of a lost child, her husband's subsequent despair and betrayals, and the painful memory of her mother's sudden death when Jo was just a girl, she nevertheless cherishes her life, more than most, so much so that when she wins the lottery, she tells no one and never cashes the huge check because she fears the compromises riches will make.

"I think of myself, of all that will now be possible for me, and I don't want any of it."

We follow Jo as she struggles with what she might have done with the money if she took it - from buying her husband the Porsche he has always wanted to giving away a million dollars to a worthy individual or treating herself to all the James Bond movies on DVD - and as her husband heals and becomes more appreciative and her children and friends thrive and she more and more delights in her uncomplicated life.

She tells only her father about the lottery, a man with dementia who remembers for only six minutes at a time, so he is safe with secrets, and his inability to share his daughter's dilemma is an especially poignant aspect of the novella, beautiful interactions.

Of course, literature requires conflict, and nothing in a good story stays the same. However, even expecting the drama to unfold, we are startled, and moved, when the narrative arc shifts and our lovely protagonist is thrust onto an unexpected path. What can you do when your life is torn apart and all the wealth on earth will not repair the damage?

This is the first novel translated from the French by this author and I'm told a film will soon arrive, from France, thankfully, as they do better translating from the page to the screen.

A profound and exquisitely written fiction on the power of love and the perils of greed, I urge you to read it forward - buy the book and pass it on. And, if possible, read it in one or two sittings, as this is a tale to fall into and remain until it plays out. Perfect for a day at the beach or an evening on the couch. Happy reading.
Posted by Randy Kraft at 6:52 AM No comments:

Just posted on Goodreads a summary review of Life after Life by the great Kate Atkinson.

The great Kate Atkinson never fails to surprise and "Life After Life" is not only different from previous novels but different from just about anything you might read. Not easy going at first - takes a bit to get into the repetitive and circular motion of Ursula's life, and all those in her orbit - but worth staying with as it evolves into a profound portrait of English life and style and the vulnerability of a nation during the World Wars. As Ursula faces tragedies, dies and is repeatedly reborn, raped and emotionally abused, discovers her own strengths or seeks comfort in indiscretions, in many ways, so goes a nation. The book is an obsessive read, hard to put down once into it, and important to stay with in order to sustain the flow. For those who read a few pages a night before they sleep, might not work. Optimally, find real time to devote to several chapters at once. I have admired Atkinson since "Behind the Scenes at the Museum" which I still recommend highly, a remarkable debut and she just gets better all the time.

Many accomplished writers begin with short stories and evolve into novels, and a few, like the great Alice Munro, master the form and stay with it. Other novelists return to the shorter form, again and again, because when written well, it is the essence of storytelling. This is how it all began - oral storytelling and poetry translated ultimately from the cave wall to the page.

I first discovered this talented writer with RULES OF THE WILD, which takes place in Africa and transports the reader not only to the landscape but to the romance of wildlife. As a woman who has lived in many places, and currently resides in Rome, Marciano is especially adept at evoking a sense of place not only as background but as the framework for the motivations and longings of residents.

Because she is also an actress and screenwriter, her dialogue is especially rich and she quickly draws the reader in.
From India to Greece to Venice, the diverse characters of THE OTHER LANGUAGE explore different facets of their lives - ego and expertise, the passion to rediscover old loves, the dissolution of a marriage, the false claims we make on each other. The writing is clear and descriptive, never flowery or sappy. We come to know the characters quickly and well and you might recognize some of them, or discover yourself.

In India, for example, a wife seeks a richer identity by draping herself in indigenous clothing like the dupatta, the scarf women wrap around their shoulders, and the distinctive sandals called chappals, clearly emblematic of her desire for a richer identity, while her husband finds her foolish, trapped as he is in writers' block and discontent.

He walked some more, all the way to the Shiva shrine at the end of the ghat. He had had no useful thoughts about the story he was trying to crack. India wasn't a place conductive to creativity, he decided, it occupied too much space with all its unanswerable questions.

THE OTHER LANGUAGE is the kind of story collection best read all at once - the diversity of character and place makes the sum of the parts a larger whole, and in this, as good as a novel told through places and faces. Or, read one at a time when you need a quick fix of fiction.
Posted by Randy Kraft at 1:14 PM No comments: