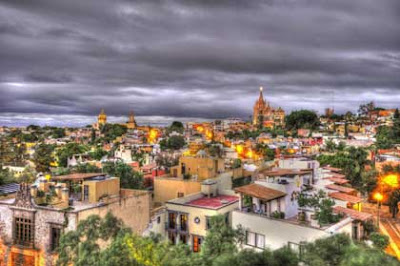 Late summer in SMA. Quieter than winter, although week-ends rock with the music of Mexicans from big cities and countryside who come to wander El Centro. They wander, they walk, they pray, they party. A lively scene.
So what do I do? I go to a late afternoon movie with friends.
There are two small theaters here, each with two screens, although more like private screening rooms. I go to the “Pocket Theater” which must have been a hacienda at one time. An elegant entry, flanked by two lovely parlor-like rooms, leads into a courtyard, typical of homes here, off of which are the two “theaters” each with roughly 20 seats, real movie theater seats mind you, and a large old-fashioned pull down screen. There is surprisingly good surround-sound, which further enhances the sense of intimacy with the film. Best part? The price of 80 pesos [$6] includes a drink from the bar, which is the room on the left and open whether you go to the theater or not, and when you are seated for the film, you are handed a bag of warm popcorn. Lights go down, no previews, no ads, just a good film. Only thing missing is the whir of the projector as these are DVD’s. Nearly first-run movies, documentaries, foreign films, old favorites, all day long, in both theaters. And also in the other theater of this type only a few blocks away. So on a rainy or cold day [although I’m told the space heaters don’t exactly warm the space] or a very hot day, as it’s naturally cool inside, one can take in the cinema. They know how to do things here in San Miguel de Allende.
Posted by Randy Kraft at 7:55 AM No comments:

Hologram for the King - Book Review

In case you missed it on the OC BookBlog, read about Dave Eggers new fabulous novel: A Hologram for the King. Worth waiting for after several not-so-great reads this summer. He is a gem.
http://www.ocinsite.com/index.php/blog/comments/ocbookblog_a_hologram_for_the_king_by_dave_eggers

Happy reading.
Posted by Randy Kraft at 1:16 PM No comments: